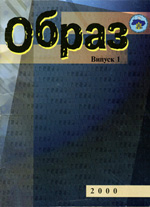 The first headings were the following: “Light of Christianity”, “Theory of Image”, “Diverse World of Literature”, “Op-ed Horizons”.

The publication form was exclusively textual, without photographs and figures.

During 2000-2013 the papers of more than 60 authors were published, 23 of them were doctors of sciences. The majority of authors are associate professors and graduate students. The scientific papers were submitted from more than 15 cities of Ukraine: Kyiv – 27, Vinnitsia and Zaporizhzhia – 4, Lutsk, Poltava and Lviv – 3, and also from Donetsk, Kamianets-Podilsky, Odesa, Simferopol, Sumy, Ternopil, Kharkiv, Chernivtsi and others.

It has become a scientific journal issued 6 times per year since that time. The thematic scope covers all aspects of journalism and social communications. The journal is added to List of scientific specialized editions of Ministry of Education and Science of Ukraine, approved by Order No. 747 dated 13.07.2015. It publishes the main results of thesis on social communications. The Publisher is Sumy State University.

The electronic version of the journal has been sent to Vernadskyi National Library of Ukraine for depositary storage and the portal of Ukrainian scientific periodicals since 2010.